Critic Steve Smith included the concert Species, Monsters, Things Artificial from summer 2019 at 601 Artspace as part of his best of 2019! He wrote:

This intimate concert featuring the violinist Pala Garcia, the violist Hannah Levinson, and the cellist John Popham, presented in a cozy Chinatown art gallery just slightly off the beaten path, allowed the composer Daniel Fox to showcase a terrific new piece, Viola and Cello, contextualized alongside like-minded works by Catherine Lamb and Suzanne Farrin. The highlight, though, was a beautifully re-conceived version of Alvin Lucier’s sublime Lovesong, in which Garcia tread a slow, attentive arc around Popham, their instruments conjoined with a resonating wire. (Watch video from the concert here.)

Thanks to Alvin Lucier for allowing us to perform Lovesong in a new arrangement. The premiere of the original version by String Noise is here. They also gave a fantastic performance of Lucier’s music, including Lovesong and the premier of Halo, at Happy Lucky No. 1 as part of Pauline Kim’s Stone Series residency.

I’m going to deliver the paper “Shifting the Plane of Audition to Analyze the Role of Acoustic Resonance in the Works of Morton Feldman and Alvin Lucier” at the conference Spectralisms at IRCAM, Paris, France.

My paper “The Perceptual Origin of the Sublime in György Ligeti’s Violin Concerto” won the Hollace Anne Schafer Memorial Award of the New England Chapter of the American Musicological Society for the Fall 2017 meeting.

I am excited to be giving a paper at the 2018 joint meeting of the AMS and SMT. I will be speaking about work from my dissertation project based on interviews with sound engineers and performers that have worked with Alvin Lucier.

Comments Off on AMS/SMT in San Antonio, TX

I presented a paper at the annual meeting of the American Musical Instrument Society in Bethlehem, PA in May. The theme of papers ranged from using 3D printing to restore historical instruments to the early history of the Martin Guitar Company. I presented on the performance practice of Alvin Lucier’s classic electroacoustic work “I am sitting in a room,” where the room is (part of) the instrument. This is part of my dissertation project on acoustic resonance in the music of Alvin Lucier and Morton Feldman. Here is the abstract to the conference paper:

Although Alvin Lucier’s I Am Sitting in a Room (1969) continues to be a central reference for discussion about the material conditions of sound in music, little attention has been given to the changing conditions of production of the work. Its recursive process of recording and playing-back continues to transform the composer’s speaking voice into a music of architectural resonances. But which architectural resonances? The original recording was made in the composer’s living room and a “performance” consisted of playing-back that spliced magnetic tape in concert halls. Then in 2005 Lucier began collaborating with James Fei on digitally mediated performances that resonate the architecture of the public performance space in real time.

This paper describes the crucial role of the sound-engineer-as-performer in emplacing living-room aesthetics into the concert hall. It traces changing performance practices using the Alvin Lucier Papers at the New York Public Library and my interviews with sound engineers that have performed the work.

There persists in the literature an overemphasis on non-intervention—of the room sounding itself. But closer investigation reveals significant variation in performative interventions and the resulting sounds. In a performance at Issue Project Room with sound engineer Bob Bellerue (2017), a few stable sine tones rapidly overpowered Lucier’s speech, growing to an ear-piercing volume. In contrast, in the MoMA recording (2014) Lucier’s speech gradually dissolves into room resonance and there arises “a cluster of tones [that] mutate—they still go-away and come-in—and sometimes they start beating with another tone” (Fei). Revealing subtleties of architectural resonances through a gradual process may have been immanent in Lucier’s living room in 1970, but in current live performance practice sound engineers often need to continually intervene through volume and EQ levels if they want to tether the subtlety of living room aesthetics to performance hall acoustics.

Comments Off on Does it matter which room Alvin Lucier Sits in? Tethering living room aesthetics to concert hall acoustics.

Mivos desynchronizes sound from the body

It was a pleasure to work with the Mivos Quartet for the premiere of my String Quartet at Elebash Hall on 9 May as part of their residency at the Graduate Center, CUNY. Here is a little bit about how I approached making this piece:

This string quartet contrasts different scales of control at which the performers shape the sounds of their instruments. At one extreme, rapid bowing articulates a steady pulse that is directly synchronized to the motion of the performer’s arm. At the other extreme, the same rhythm is achieved through the interaction between instruments as an acoustic effect disarticulated from the bow arm’s rhythm: the standard just-intonation of the instruments causes harmonics on the cello and viola to have conflicting tunings and thus to produce beat rhythms that the performers can turn on or off, but not regulate in speed. Progressively the performers force their instruments into states that produce more complex and unstable sounds. The moment-to-moment play of sound desynchronizes from the bodies of the performers, though it is always dependent upon their refined skill.

Comments Off on Mivos desynchronizes sound from the body

Williams College held the annual All-Night Marathon of Voices on 19 January. Shortly after sundown Ellery Galvin led members from the college Concert Choir in a performance of Tone (excerpt). Three groups of singers sustained a single tone seamlessly for 10 minutes. The groups were positioned around the pews so the sound slowly shifted location but maintained a constant volume. The piece requires careful coordination of breath and Ellery led the singers through a beautiful performance. A few minutes into the tone a strong acoustic resonance arose and accompanied the sound of the voices. Thanks to Ellery and the singers! There was a lovely atmosphere with varied stylistic contributions from members of the community.

Comments Off on Tone (excerpt) at Williams College

Pulling Faces for Or and Nir (for harpsichord and video project)

My new piece “Pulling Faces for Or and Nir” will premiere on 14 December as part of Julie Zhu’s Hunter MFA thesis exhibition. The reception is 6-9. Repeat performances of my piece will be on Friday 15th  and Tuesday 19th December, but there are 4 concerts full of premieres, including the big finale on 6 January with Windup Elephant! 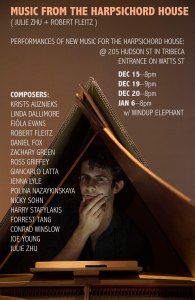 From the program notes:

When I first met my two young nephews they didn’t speak English and I didn’t speak Hebrew. One way we played games was to pull faces. When they pushed my nose my tongue would pop out. When they pulled my right ear, my right eye would shut. As long as the cause and effect were well-timed they would laugh. This piece pretends that sounds act like the strings of a marionette, running from the keyboard to the face. Each strike or release of a key triggers a movement of the performer’s face.

My interview with Suzanne Farrin about her monodrama “La Dolce Morte” recently performed at the Metropolitan Museum of Art and her new opera appears in the latest issue of VAN Magazine.

Comments Off on Interview with Suzanne Farrin